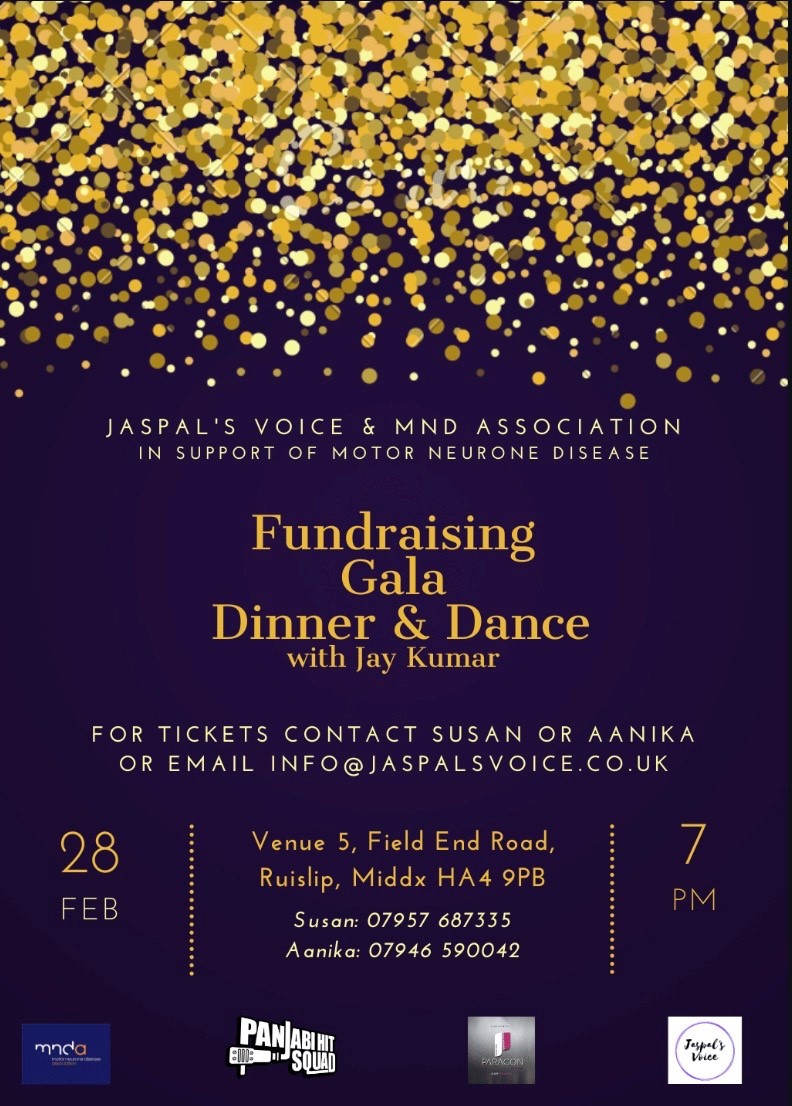 Exciting news! For the first time ever we have collaborated with MND Association to organise a ‘Gala Dinner & Dance’.

Please join us for a charity dinner which includes a complimentary glass of bubbly, 3 course Indian cuisine, glass of wine, soft drinks, raffle and auction, followed by a night of music by Paragon, dancing and entertainment with top London based Bollywood Choreographer Jay Kumar.

All proceeds from this event will go towards research to help find a cure for Motor Neurone disease (also known as ALS) and communication technology. Studies have shown that the ability to communicate is a high priority for people with MND and has a significant impact on their quality of life.

MND Association have a created a great concept by launching MND Buddies which is an online activity hub for children aged between 4 and 10 to learn about Motor Neurone Disease through stories and games.

As MND awareness month is approaching we have created a short video to raise awareness.

I was honoured to be invited by Brent Sikh Centre Gurdwara (Temple) to address the congregation and raise awareness about Motor Neurone Disease within the Asian community. I felt this was a great opportunity to make a real difference for those people living with and affected by MND. I had discovered through my research that very few Asian people used the services provided by the Motor Neurone Disease Association. Through further discussions my belief was validated that there is a very real stigma attached to those from the community who have been diagnosed with any neurological disorder. They talked about how they hide their loved ones from the world as they fear judgment by others in their community and this stigma leads to additional stress thus resulting in depression. By the end of the session people were still shy to take leaflets in front of others and only did so by taking me aside individually to tell me their story.

This has now led me to give further talks in other temples.

Last Updated: May 2, 2018 by Susan Graham Leave a Comment

I had the pleasure of meeting Dr Hemangi Sane and her mother at the MND conference in Dublin. She was diagnosed with MND in 2004 during her medical practice in New York and then went on to start a non-profit organisation called ‘Asha Ek Hope‘ foundation for MND/ALS in Mumbai. She was honoured with International Women’s Day Award in the year 2013 by the Mayor of Mumbai city for treating and empowering patients with ALS/MND and research for a cure.

She has spoken of what it is like living with MND :

“MND is a physical condition which psychologically breakdowns the affected person and the family members. But we have to try to come out of this slump and live as full life as we can, coping with the shortcomings. Here are some helpful tips that I used to come in terms with MND and start living again”.

As the MediVoice application evolves and matures I have been fortunate enough to come into contact with many remarkable people passionate about helping those with neurological conditions. One such person I met recently was Mary Matthews who like me formed her company, Memrica, after her sister passed away suffering from motor neurone disease. Mary wanted to build something that would spark memories of her and to help others with neurological diseases. She developed Prompt, a mobile application that solves memory problems of users facing with dementia and other neurological conditions. It helps users to create notes about things they want to remember. The company also creates links between stored content and shows personal context about people, places, and events. In addition, it provides a Web dashboard for family and friends to add photos and information, send messages and reminders, and see when they’ve been accessed.

Prompt by Memrica is currently available on the App Store.

In its early stage MND (also known as ALS and Lou Gerigh’s disease) can show similar symptoms as Parkinson’s disease, which is also a neurological disease.

Commonalities between MND and Parkinson’s disease allow researchers to develop more effective treatments for both diseases.

Difference between Parkinson’s and MND

In the early stages of the disease, MND patients may notice that performing regular everyday tasks has become more challenging. For example, they may experience difficulty climbing steps or getting up from a chair. Symptoms may first begin on one side of the body, but as the condition progresses, they spread to both sides.

MND and Parkinson’s disease share symptoms associated with the negative impact of both conditions on movement and muscle function.

Parkinson’s UK have recently partnered with artificial intelligence experts, BenevolentAI, in the hope to find a cure by using technology to help researchers find new and better treatment.

More information on – Could artificial intelligence find a cure for Parkinson’s?

Motor Neurone Disease Association have produced a short animated video to help explain what MND is….

Here are some facts about motor neurone disease which clearly shows that over 80% of people suffering from this disease will have communication difficulties, including for some, a complete loss of voice.

The competition is inspired by the work of Claret Press author Sarah Gray, who has Motor Neurone disease. Her short story collection Half Life deals with aspects of physical and mental illness in innovative and original ways. The Judges will be looking for similarly engaging and novel stories of no more than 5,000 words inspired by these issues. Stories can be written from any perspective and in any format. This can include murder mystery, thriller, romance, post-modern, horror, etc.

Entry forms can be submitted by clicking on the button below. On the subject line state: 2018 MNDA Short Story Competition.

There will be three prizes of £250, £150 and £50 respectively. Claret Press will publish these and all short-listed finalist in a new collection.

Winners will be announced in the autumn of 2018: Good Luck!